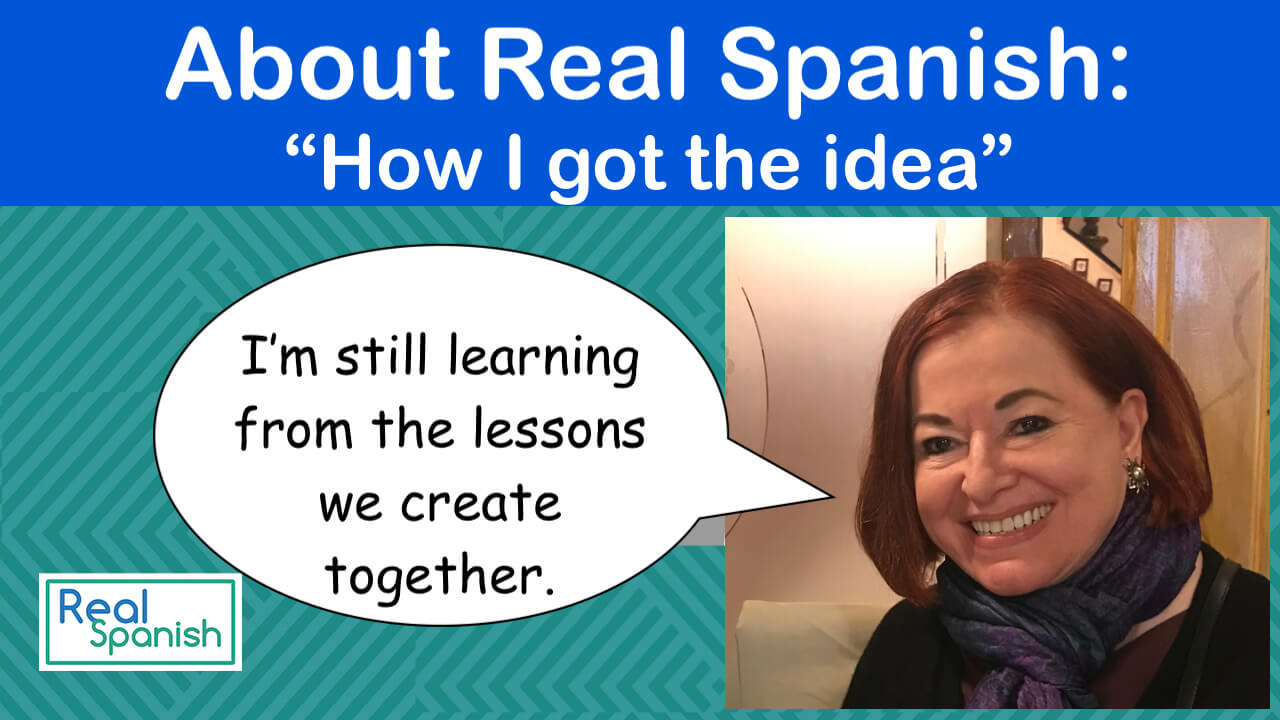 I: So hello everybody, welcome to Monoglossia. We have a special guest today. It’s Elizabeth from Real Spanish, which is a website as well as a YouTube Channel. So thank you very much for being here Elizabeth.

I: Can you please firstly introduce yourself and Real Spanish?

E: Okay, well, my name is Elizabeth Coelho … I was a language teacher both in Britain and later in Bulgaria, teaching English, and later in Canada where I lived for many years, and I taught English as a second language to students from other countries.

Later I ended up teaching teachers at the University of Toronto, and I started being invited to give talks to teachers in Spain… and I did it in English. And my first gig was actually in the Basque Country, where the language of instruction is not Spanish, but Basque, or at least in many schools it’s Basque and so I had the rather strange experience of delivering my lecture…  my talk with Powerpoint, all in English, and at the back of the room there were some translation cabins.

I was used to a very different way of teaching… workshop-based, very interactive kinds of sessions, and this was me, standing on a stage, addressing a few hundred people who couldn’t even hear my voice. And so, when I kept on being invited, I decided, well I’d just better learn Spanish then, because everybody in Spain understands and uses Spanish, even though their first language may be Basque, or Catalan in Catalonia, where I’m living.

And so I started learning Spanish in Toronto and then I came to Spain a couple of times…. I went to Mexico, I went to Cuba, to do these two-week intensive courses that they do for foreigners. And that was very… very helpful.

And eventually, I started giving my talks in Spain in Spanish. And I prepared for those talks with a Spanish teacher,who sat with me side by side as we went through all my Powerpoints… and although I believe my accent was terrible, and still is, people were so appreciative that I’d made the effort. So that made me feel great about learning Spanish.

And then, later, I came to live here, as I said. I realized that, you know, if I was going to live here I needed to understand what people were saying when they were speaking at normal speaker speed, and not at teacher speed, which is quite different.

And by chance one day I came across a TV series. It’s called «Cuéntame cómo pasó»: “Tell me how it was”, or “Tell me how it happened”. It’s about a family in the 1960s, when Franco was still very much in charge in Spain, and there was a lot of repression, political repression. And it’s the story of a family and their teenage kids, going through what was… what was a gradual change in all of Europe at that time. In 1968 all of the students were protesting everywhere, and they started to do so in Spain…And it’s about this time of great change in Spain, but it’s also very funny… and I started using it as my linguistic resource.

I kind of understood it and and it was fun, and what I started to do was to select very short scenes and study them in depth by myself with a dictionary. And of course, I had a… I was able to switch from the TV show to the… to the online… to an online dictionary, because I was watching the… I was watching the program on my computer, streaming not …not live, and I would study the vocabulary. I would make notes. There was a transcript that I could download. I found the transcript actually was not that helpful because, as you know, with subtitling and transcripts, sometimes it’s the meaning that’s communicated, but it’s not the actual same words. So… so then I corrected the transcript according to what I was hearing. I focused on the vocabulary. I looked up loads of expressions. Some of them I had to go to Google to find out what they meant.

So I would end up with a text which was a video of about a thousand words, and I would study that in depth. I would listen… and read, and listen and read, and listen and read, several times, until I could understand every single word.  I could separate it out from the stream of words. I had fun doing it because I could feel myself getting a better ear for what people were saying, speaking at normal speed. I was able… now and then I was able to actually use a new expression in a conversation and that made me feel fantastic.

… And later on… I thought, you know this… this approach might work for other people too. I began to think about ways of using video clips for this kind of intensive focus.  And so that’s basically what we’ve done in Real Spanish. We’ve taken video clips from TV shows and from movies, very short clips,  three or four minutes, and we’ve analyzed them completely… with some grammar points… the vocabulary, the expressions, some cultural information, and all of that is combined in a lesson. And that’s what Real Spanish is all about.

And then more recently we’ve been taking some of that material and developing some… mini lessons we call them, for…for posting on YouTube and I don’t know if you’ve seen some of those?

E: [They are much] shorter… because not everybody wants to study in depth. So this was a way of… giving people more sort of bite-sized pieces of Spanish to… to… to deal with on their phone, on the Metro for example.

I: Yes exactly, it’s really convenient for me too. I’m doing work online but then from time to time I take a break. I play a short video, it just works so well.

E: Yeah, yeah yeah. So that’s what Real Spanish is all about… I’m really drawing on my experience as a language teacher and as a language student. And of course, I’m not a native speaker, so I’m working together with a Spanish teacher, a native Spanish teacher, and…. all of my other collaborators, like video editors, voice-over people and so on… they are all Spanish speaking so… and…  and my web designer too, so that has helped enormously with my vocabulary.

Advanced learners… do find it difficult to continue learning because most language schools and most online courses go up to about B2, which is sort of high intermediate level. I really felt this was a niche of people who were not being well served… The best way for them to continue, of course, is to go and live in a Spanish-speaking environment, but you can’t always do that, so we decided to take pieces of authentic language and … and use this intensive approach…

I: … It has been really interesting talking to Elizabeth about her experience in Bulgaria as well, which I was really amazed to hear about. She was an English teacher in high school in my home country… so yes… I have also lived in the UK for a few years, so this is a… an interesting point.

All right, so I’m going to put links …to Real Spanish as well as the YouTube channel, so I ask my viewers to please subscribe for some regular Spanish content, a link to interesting facts and colloquial Spanish language… and thank you very much Elizabeth for joining me.

I: Lovely talking to you.

I: … igualmente, same, yeah. Right, thank you so much, have a great evening and… I’ll keep you informed about my progress on your website

About Iglika: Iglika has an eclectic interest in language and language learning. She and her husband Alex Stoupak have their own channel, Monoglossia, where you can find videos on a wide variety of language topics; you may find us popping up on each other’s channels from time to time. If you are interested in language and languages, take a look! https://www.youtube.com/channel/UCYs4Xnp7WWc4y-nOde9r_xg/videos

Real Spanish: online Spanish courses and mini-lessons for people who are serious about improving their Spanish

We focus on colloquial language in order to help you particpate in real conversations with native speakers.

Enjoy your Spanish with us!