In Spain/ En España New Year’s Eve, or Nochevieja (Old Night), December 31, is mostly celebrated with friends, although it’s often celebrated with family as well. The dinner is very similar to the one for Nochebuena, but at 12 o’clock there is great anticipation. This is the moment when everyone gets ready to eat 12 grapes, one for each stroke of the clock at midnight.

There are two main theories about the origin of the 12 grapes ritual. One says that in 1880, the Spanish bourgeoisie wanted to imitate the French, eating grapes and drinking champagne. The second theory says that in 1909 there was a glut of grapes in Alicante, and it was thought that selling them as “grapes of good luck” would be a creative way to sell them— and at a very reasonable price too.

In Latin America they also eat 22 grapes, but this tradition came from Spain. In some Latin American countries they have other interesting traditions as well. For example, in Colombia, Ecuador, Peru and Venezuela they burn an effigy in the street. This effigy represents everything negative about the year that’s just ended, thus putting an end to it and making way for better luck. 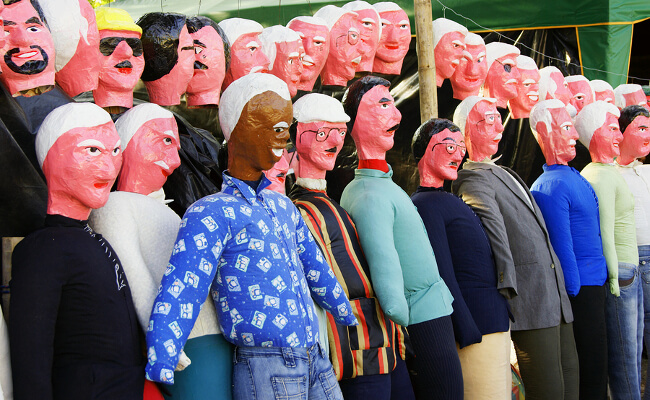 After eating the 12 grapes many young people go to parties that they have organised themselves, or to cotillions, which are special private parties for this night. They are usually held in huge premises such as nightclubs, hotels, etc. The price of tickets for the cotillions varies, but the norm is between 30 and 60 euros. The ticket usually includes an open bar; that is, you can drink all you want. Otherwise you can have several drinks, usually with a limit of between three and five; it all depends on who is organizing the event.

One tradition is to wear red underwear, said to bring good luck, but it has to have been a gift from someone else. However, in Argentina the underwear is pink, to attract love. And in Venezuela, yellow, to bring prosperity.

There are other superstitions too: for example, eating lentils at midnight brings good luck at work and with money; in Chile they sweep right through the house and out into the street to get rid of all the bad energy; in Colombia and Venezuela they go out with an empty suitcase to bring travel and adventure in the coming year.

Well, if you are superstitious, you can choose the tradition you like best. We wish you a happy and prosperous New Year!

Why not make 2020 the year you improve your Spanish with our online Spanish courses? Take advantage of our half-price offer on the annual subscription, extended until the end of January!